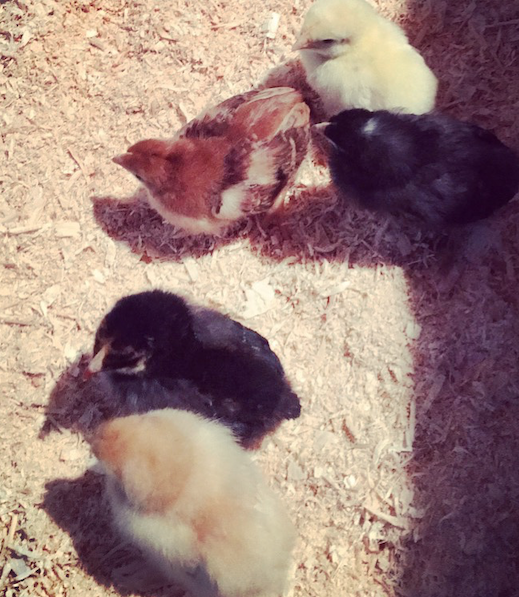 When I first got chickens I was the biggest rookie ever. The only other animal I had ever cared for in my life was a dog. I mean it when I say I had zero experience.  In addition to that, I was on a very strict budget. I had just bought my own house at 22. I had student loans and was working full time. Plus, I was constantly spending money to redo portions of it so I didn’t have a ton of money to spend. Regardless, I just decided one day that I was going to get chickens and so that’s what I did. I think you will find that adding chicks to your homestead is actually quite easy.

What Kind of Chicks to Get?

I chose a variety of chicks. Honestly, I didn’t even know what they actually were! I just picked them based on their colors. I did make sure that I had 5 that were different to be able to tell them apart. Much later I found out I had bought a barred rock, a Rhode Island red, a golden laced wyandotte, a buff orpington, and a white broiler. I was aiming for all laying hens. As you can imagine, the white broiler was not what I thought I was getting but I kept her. I was thrilled. I was so excited to have my little fab 5 and was eager to learn all about them as they grew.

Please be advised I am not, by any means, giving you advice on how you should raise your chicks. As I mentioned, I was a rookie and I had no idea what I was doing. I was using the information that I found and what I knew to make it work. It is frowned upon to do this but I set up my chicks in my basement. I had a heating lamp in my house (yes, I know these are a fire hazard) because they needed to be kept warm. I put them in a big plastic sterilite tote with wood shavings in the bottom.

For water, I used a small plastic container that I filled with rocks and added water until it was just above the level of the rocks. This would prevent them from falling in and drowning while they were small. For food, I just put it in a small plastic container that they would eat out of. I do think people spend a lot of money on food and waterers that really isn’t necessary.

When I first got chickens I only planned on doing this one time. That meant I didn’t want to invest in a bunch of equipment just to use it once. I did a lot of research around what alternatives there were and, thankfully, I found these methods to work very well. Up to this point I had only paid for the chicks, the shavings, the light, and the feed. We were still only around $20 total so definitely very affordable.

Most of the cost that comes with first getting chickens is the coop. The equipment and supplies needed really don’t cost much. Even the chicks don’t cost much if you are just getting them at your local store. The coops, however, can get pretty costly. I had 3 smaller sheds that were already built in my backyard when I bought my house. One I used for storage, one I didn’t use at all, and the third I decided to turn into my coop. It wasn’t the prettiest by any means, just an old tin shed. There were gaps in the sides but it was insulated and had electricity so that alone made life easier. I caulked the gaps shut to keep any unwanted critters out and that was a cheap easy fix.

After many remodeling projects I had a ton of shelves, windows, doors, and other various wood that I had taken out of my house. I decided to use them as the infrastructure in the coop. I built a wall with a door to keep the chickens even more secure from any animals. This also made an area where I could put all of my supplies. This was one of my best choices, it was so convenient! I would always recommend having at least a small area where you can keep everything. With our new coop I’ve also had to haul everything back and forth from the garage. It takes me a lot longer and I spill wood shavings everywhere.

To finish this part of the project I had to buy some screws and caulk. I spent about $10 between the screws and the caulk. I used some old drawers out of my house to create their nesting boxes. The ventilation in the coop also needed some work though. It seems counterintuitive because they could get cold but your animals really do need that ventilation. There was a window but it didn’t open at the time. I bought some clearance hinges from the local store and made it so that I could open and shut it. Total for everything I bought to transfer the coop I think I spent around $20.

At first I didn’t think I would need electricity and I just wanted to call out to you that you should definitely make sure your coop is near a power source. It is possible to get through winter without electricity but you will spend a lot of wasted time breaking ice out of the waterer. It’s well worth the investment to buy the bottom heating element (we like this one) that you can put a metal waterer on. I didn’t invest at first and looking back I should have just spent the money.

My chickens lived in my basement for quite some time. I checked on them daily to hold them, feed, and water them. Someone once told me to hold your chickens regularly they would be more comfortable around you when they were adults. I wanted my chickens to want to be around me so I held them very often. Once a week I would clean out their big tote and it stayed clean enough for them.

I vividly remember getting home one day and walking down to the basement to find one of the chicks up on the edge of the tote ready to escape. In Michigan it can still be very cold through the end of April so I decided at the start of May I would move them out to their coop. They were still pretty small but I couldn’t risk them flying up to hit the heat lamp and accidentally starting a fire in my basement. I knew there was a chance they would be colder but it was better than burned alive. As it turns out, I was probably just a worry wart, because they were absolutely fine and they all lived through it.

My only solid piece of advice from all of this is no matter what your coop looks like or where you put it- make sure it is secure. That is the one thing that I’ve always been very strict on as we moved and transitioned. I’ve only lost one chicken to a hawk when they were out free ranging. My neighbors had racoons open their windows, get in their coop, and eat their birds. It happens all the time ya’ll. Make sure your coop is secure! (This also helped me sleep at night because I didn’t lay awake wondering if something was eating them).

All in all, I only spent around $40 to start my flock of chickens. If you were wondering, three of the original chickens are still here with me nearly five years later. You don’t need to buy a fancy trough to put the chicks in and you don’t need a great big fancy coop. If you are thinking about chickens, just do it and figure it out along the way! That was the funnest part for me. I will give one word of warning- chickens are the gateway animal! It wasn’t long after I got them that I decided I wanted even more animals too….