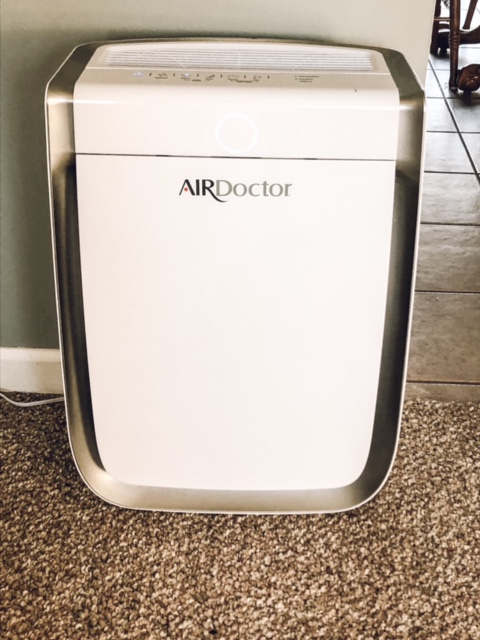 Before we moved to our new house I decided to splurge on an Air Doctor. I had been putting it off because of the expense that was associated. I simply couldn’t justify the cost and I continued to research to see if I could find alternative options. They happened to be running a good sale at the time so I decided to take advantage. We’ve been using the purifier for about a month now so I’m going to give you my initial Air Doctor review.

As always, I did a ton of research before making this purchase. I research things that cost me $25 so imagine that times twelve! In the end, there just wasn’t another option that did everything the Air Doctor does. The number one reason is that the Air Doctor filters particles as small as .003 microns in size. I scoured the interweb and I could not find another filter that got particles that small. Of course, each filter also had different measurements for what they filtered so I had to really work and do math (yuck). Perhaps I missed the options somewhere, but I couldn’t find anything comparable.

The Air Doctor is expensive. I ended up paying around $300 for mine and it came with an extra filter due to the promo that they had running. There are a lot of social media influencers that have promo codes on it, too. Maybe someday I’ll ask for one of my own! I also used one of those on top of the promo which is why the cost was good. They run various specials all year round. For reference, I bought mine in the beginning of October as a fall promotion. However, like most manufacturers, they have a good black friday special as well. If you aren’t in a hurry I would definitely suggest waiting until black friday.

We purchased the Air Doctor 3000. I haven’t been that familiar with the history of the product but I do believe that this is the original Air Doctor. It circulates 1,274 sq ft. two times per hour. This is our entire main floor that is getting filtered 2x per hour. If you wanted to increase the amount of times it gets filtered you would need to get additional purifiers. We don’t live on a dirt road and we don’t deal with wildfires. The main reason I wanted it is to deal with any fumes from cooking, our pets, and any other allergens. I tend to have really bad allergies so this was a big reason for getting it.

Just a word of warning, the 1000 seems to sell out often! It’s the cheapest option. If someone is debating on if they want to get one this is generally the one they will get. It’s an affordable way to at least clean some of the air in your home.

As mentioned, we got the Air Doctor 3000 and we’ve been using it for about a month. We bought a new(to us) home in October. There was a very bad smell because they had previously smoked within the house. We had a lot of work to do and I was excited to let the Air Doctor get to work. The first thing I did when we got in was to get it hooked up and running.

Initially, I was disappointed. It didn’t take the smell out of the house as I expected. Even though it was so stinky there, but the Air Doctor was still blue and said we had good air. I couldn’t believe it! Of course, I had never had an air purifier before but I foolishly assumed that it would somehow take the smell out. What I failed to realize was that the smell was on the walls, windows, and carpet. Once we took the carpet out of the house the smell went away. Don’t set yourself up for disappointment and think that your house will magically smell better because your air is pure.

There was one room of carpet that smelled horrible. We could tell this was their most used (and smoked in) room of the house. When we pulled up the carpet we wanted to make sure that the smell was going to be gone. Look, I live a non-toxic life but with this house it was more important that we were comfortable living here. We used Kilz to paint on the floor and make sure any smell was gone. Our house reeked of chemicals to the point it was giving me a headache. I set the Air Doctor up right next to the room and let it run. This time, the light was red and it knew that there were a lot of chemicals in the air. All night it was running on high. By the time we got downstairs the next morning there was only a faint smell left. Impressive.

Our Air Doctor is generally on blue and my allergies seem to be a lot better than they were at our old house. It turns red when I’m cooking which makes me feel like a terrible cook but after about 10 minutes it’s back down to normal. It’s hard to feel like it’s working when it tells you that your air is good all the time. I’ve had to come to terms with the fact that it means we have a mostly toxin free home and that it’s a good thing. Our air is pure because we’ve worked to get it that way. When it’s not we have something to clean it up. All is well.

Overall, I do recommend it. To sum up my Air Doctor review, it’s worth the price. Things are going to happen in your home even if you are a non-toxic person. Your oven can cause impure air and even non toxic people buy commercial ovens from the store. It’s worth the peace of mind to know you are breathing clean air.