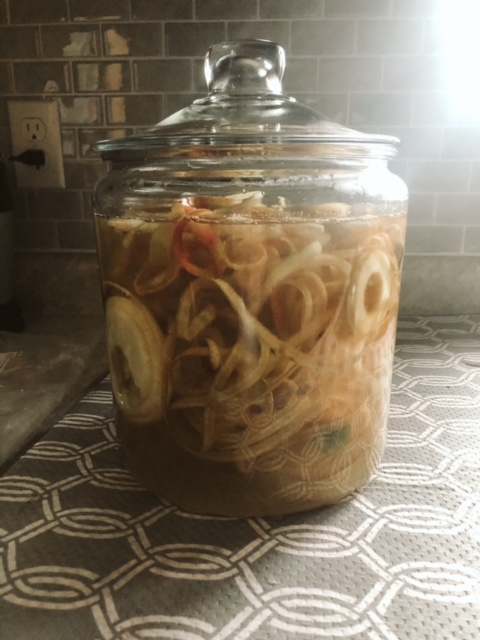 Present day: it’s fall of 2021 and inflation is absolutely skyrocketing. Working within the food service industry, I have first hand experience on how much costs are rising. Each day I’m getting emails with more cost increases. Each day I realize how much more important it is that I preserve my own food. I realize my choice to start purchasing from Azure Standard was truly life changing because I’ve been able to buy in bulk and avoid some of the cost increases with the stockpile of food that we have. The other day my mom went to the store and a gallon of apple cider vinegar was $15! Before we processed apples this year for sauce and pie I researched what to do with the scraps. This apple cider vinegar recipe was super easy to make and ends up costing pennies.

The standard apple cider vinegar is probably only around $5 per gallon but it doesn’t have all the benefits that the organic vinegar does. The raw organic apple cider vinegar contains something called mother. The mother is what holds all of the enzymes and probiotic benefits of the apple cider vinegar. Without it, you might as well be drinking normal vinegar (which is just gross). It looks disgusting because there are all kinds of particles floating around but those are actually the very best part of the organic vinegar. Making your own ensures that you will have the mother in it and all of the benefits without the added cost.

Personally, ACV helped me with a lot of digestion issues. I went to the doctor so many times for this incredible pain in my side and no one could diagnose it. Eventually, I was sent away with IBS and told to take some little pill if I had issues. I did not want to be on prescription drugs and it didn’t even help either. Finally, I decided it was worth it to give ACV a shot. So I just started taking a shot of apple cider vinegar each morning to see what it would do. Within about a month I realized I didn’t have the pain anymore. My digestion had improved tremendously and without any prescriptions or drugs. I can’t tell you that it will cure anything that you are going through. I can only tell you that it did work for me.

Now, on top of all the wonderful apple products you got originally from your apples you have another added bonus! When I started preserving I was happy to just be saving our own food. It seemed like such a chore just to preserve food that it was all I could handle. Now that we are getting more experienced I’ve started to shift my focus on getting the most I can. I want to make sure we are getting every ounce possible out of our food. This is the easiest way that I’ve found to use up apple scraps. Plus, it’s the most cost efficient thing I think I’ve ever found. Water and leftover food, plus a little sugar. Pennies people, pennies!