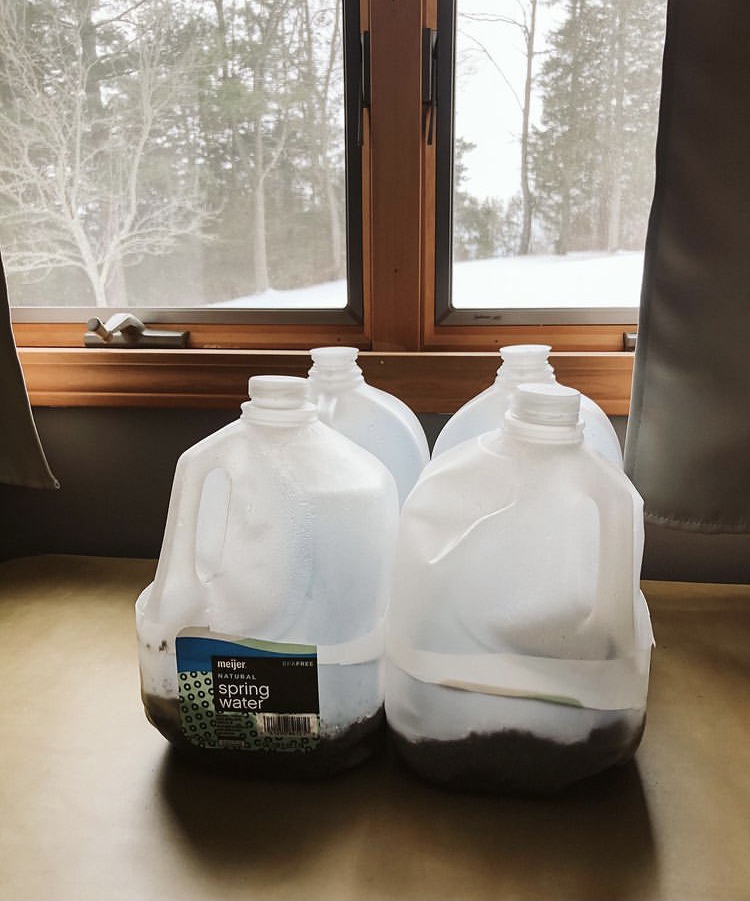 Before 2021 the only time I had ever tried to start seeds was as a kid. I was maybe 10 years old when I tried it. I actually got a seed starting kit for my birthday that year and I was so darn excited about it. My parents helped me get everything planted and it grew like crazy. Unfortunately, we didn’t know much about seed starting. We started them too early and we didn’t know how to harden them off to get them in the garden. We grew them all but lost them all before we could get them into the garden. In 2021, we decided to start our own garden. I jumped into homesteading and decided I was going to try to start my own seeds too. When I started researching ways to start I was clueless and everything I found was expensive. I didn’t want to buy a bunch of stuff without knowing I would need it again. Fortunately, I found that there are a lot of cheap ways to start seeds if you know what you are looking for.

My parents have really hard water at their house. They prefer to buy gallons of water from the store to drink because the flavor is better. We also get all of our milk from the store so we have gallons on hand occasionally. The water gallons work great because I don’t even need to wash them out. The milk gallons need to be washed thoroughly before storing them. Even with washing I have found that they still have somewhat of an odd smell when I cut them open. It’s definitely not my favorite thing but it is worth it to not spend extra money. I was them as much as possible to get the smell off and move on. Using them just once will get the smell out too so at least it goes away quickly.

Every single morning I have a protein smoothie with some sort of greens in it. During the summer I can cut the greens out of our garden so I don’t have to buy them. In the winter I purchase the clamshells of greens. I was recycling them until my husband pointed out they could be used for seeds. He was right! This is where my best seeds were grown when I started them! They hold quite a few seeds too and allow them to get some decent growth before repotting them.

This is one that I opted not to do simply because I like to reuse egg cartons. A lot of chicken people like me prefer to use them for their intended purpose. Some people tend to have an abundance of them though so it works for them. If you are buying eggs you might as well use the containers! These are a great depth for just getting seeds going. They obviously won’t be able to grow very big because they are shallow but they’re perfect to get seeds germinated. The other great thing about these are that you know exactly where you put the seeds! When you have a more open layout like the gallons or clamshells it can be hard to know exactly where you put them before they start popping up. Maybe I’m just overanalyzing it but I prefer to know where my seeds are at all time!

Who would have thought that your toilet paper would have two purposes! This is one that I know you have to have lying around  at some point. It’s super easy to fold up the bottom of the role to be able to add the dirt and seed. Again, these won’t hold plants forever but they do get more depth than the egg cartons. The hard part is that you can’t use them for any long periods of time because they will disintegrate. This has to be the #1 cheap way to start seeds!

These are super cheap from the dollar store and they usually come with a lid! Plus these are reusable too. I use them to start seeds as well as to hold the pots that I move my starts too. If you have starts going for awhile you’ll need to “up pot” them as they grow so they have more room. I have a stack of these pans on hand so that my plants are easy to move around and the pots can still drain without making a mess.

If you have the money to spend, the plastic trays that most seed companies have are worth it. They have great drainage systems that makes starting seeds much easier. You can add water to the bottom of the tray so that they can soak up the water that they need. With all of the options above you will need to work to make sure they are getting enough water but not too much water.

The biggest thing that I’ve found is that no matter what you use it needs to be able to hold heat and moisture. That typically means it needs to have some sort of lid. The best seeds that I had were the ones that were in the clamshell where it would seal and hold everything in. Once they get bigger they don’t need that as much but for just starting it is necessary. I even tested this with some dollar store seed starting trays. The plants popped up just barely after I started covering them with gallon jug tops. Ultimately none of them survived and it was a total bust.

Our first year of seed starting wasn’t that great to be honest. That’s why I’m so glad I found cheap ways to start seeds! I really only had a few plants that made it. My broccoli starts did the best until the rabbits ate them. However, we also lacked the light and heat that we needed. Next year, I will invest into a better system to make sure they are getting enough heat and light.

What other ways have you seen seeds started? What other cheap ways to start seeds have you found?