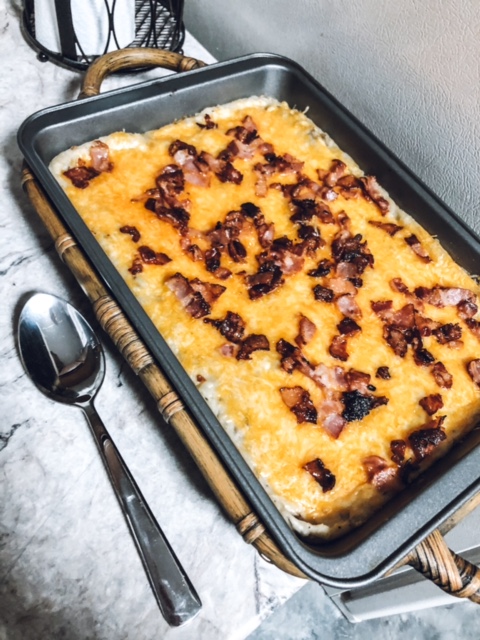 Funeral potatoes. Party potatoes. Cheesy Potatoes. We’ve all had some form of them at some point in our lives and they are one of my favorite foods. We don’t eat them often because they don’t have the best ingredients but for special occasions they always pair well. I also like them to bring to someone if you are looking for a good freezer meal. My mom, however, took it to a whole new level with her Cheesy Bacon Party Potatoes. They are hands down the best type of potato casserole that is out there.

They do take a little more work than your average party potatoes. Most of those you just buy the frozen potatoes and mix all the ingredients together before you bake. This recipe requires you to have regular potatoes and also cook them so they can be mashed. I promise you though, the extra effort and work that goes into these is so well worth it.

Once I started making these I realized there are a couple things that you could change if you wanted to. Of course, we normally don’t because that’s just not how mom made them. Mom’s cooking is always the best so why mess with perfection?!

The recipe calls for a pound of bacon that is cooked before being used as topping. If you were looking for a time saver you could totally use bacon bits. In my opinion, this wouldn’t be doing the potatoes justice. Bacon bits are good on a salad but just not the same as some good home cooked bacon.

The other time saver that you could choose to utilize would be to not peel the potatoes. This is definitely something that I have actually done. I honestly really like the skins on potatoes and my husband thinks that these cheesy bacon mashed potatoes actually taste better with unpeeled potatoes. I tend to lean towards mom’s version unless I’m in more of a hurry or only making it for him and I to enjoy.

Cut up the bacon into small pieces and cook to your preference. Set these aside.

Cook potatoes. Typically this is done by boiling them but now I use my Ninja Foodie to cook them more quickly. Mash potatoes using a mixer or a hand masher. Add salt and pepper to taste. Set these aside.

Melt the butter in the pan and saute the onion until it is translucent. Add to the potatoes. Add the sour cream to this mixture. Spread in a 9×13 pan. Sprinkle the cheese on top. Sprinkle the cooked bacon over the cheese.

You can absolutely make these ahead of time. We often make them the day before. Do everything except the baking and put them in the refrigerator to bake the next day. You can also freeze them too. We like to do these as one of those meals that you drop off after someone has a baby or if they are in need of a little love. Again, do every step up until the cooking and put in the freezer. We haven’t tested out how long they would keep for but I assume they would be good for up to 3 months at least.

I order all my ingredients from Azure Standard and highly encourage you to try them out!

This isn’t a healthy recipe but it is a good recipe. They have 3 of my favorite things: cheese, bacon, and potatoes! I’m not sure what is better than that. They are a great comfort food for colder days or a great side if you are cooking out.

The best potato recipe you will ever have!
Print Recipe Pin Recipe
Course Side Dish
Cuisine American