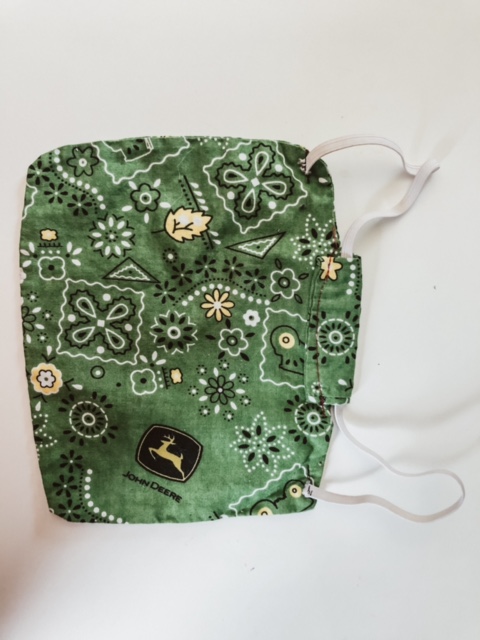 The first few years that I had chickens I had zero issues with them. They didn’t pick on each other. We didn’t have predators. The most that occurred was a mouse in the chicken coop. I was really careful though. Their coop was really secured. We only fed a certain amount of feed to make sure that there weren’t critters. Then all the sudden we had a pecking order issue. They started picking on each other and it was a mess. I found a pattern for chicken aprons and decided to give them a shot.

Chickens don’t really need to have a light and/or heat in the winter time. For the first few years I didn’t give them anything. They were in an insulated coop and I knew that they were plenty warm. I’m not interested in making them produce eggs when they don’t want to so they don’t need artificial light. My husband, on the other hand, has a different opinion.

When we moved to our new house we had to change the coop that we were using. The new one was not insulated and not as warm. I admit, I was a little worried about it too. It was a temporary fix but I did want to make sure that they were taken care of still. He convinced me that they needed a heat lamp in the winter time. For that first winter we had record low temperatures. A polar vortex is what it was called. So low that people were advised to stay home from work. They advised people to bring in all of their animals to at least get them somewhat out of the cold. They did just fine that winter though and we felt extremely blessed.

Then we invested into our new coop. It was built much better than the old one and really gave them a good shelter. Still no insulation but thick wood to block the wind and the cold. Just agreeing with my husband we decided to put the heat lamp in again that winter. We left it on all day and night for days on end. That’s when the pecking started. They literally started to peck each other to death. I had 2 birds in the “infirmary” in the garage. They stayed in little pens until the feathers on their backs grew back. I would put them back out into the coop and within days they were bald again.

What Did We Try First?

At the time, I didn’t see what the issue was. I wasn’t sure why they were acting that way. I had tried everything. The blue coat, tree pruning sealer, separating the dominant bird. The only thing I had heard of that I didn’t try was clipping their beaks. I had a hard time with that though. For some reason I just couldn’t bring myself to do it. So I just kept searching until I found chicken aprons.

Originally, I had found them for chickens who had feather loss on their backs because the roosters were being too rough. I thought about it and figured it might work. It was a last ditch effort, honestly. I looked into buying them on etsy but I thought they were a little expensive for something that I knew I could make. There were no patterns when I first started looking but I wasn’t about to give up hope. I finally found someone who had a picture of their pattern that I was able to get printed. I never found it again though so I am sharing it here for both you and myself too.

The elastic pieces go under each wing. I find it easiest to put one wing on at a time. Get it tucked in under one wing, straighten the apron, and get it placed under the other wing. I’ve been able to do this myself a few times and it worked just fine. I do appreciate it when my husband helps though because I can get it tucked in quicker and more easily. My chickens definitely don’t mind them either. They run around just like normal and act like nothing is different. I have found that they have the ability to somehow get them off if they want. I’ve had them stay on for weeks at a time and I’ve had it where they fall off every day.

It took awhile for them to heal but the aprons did work. They prevented the chickens from repeatedly plucking out each other’s feathers. It gave them time to get everything healed so they could fully recover. Plus, I didn’t have to separate them anymore. I love my chickens and go through a lot of different things to save them. Including keeping chickens in our garage! It’s much nicer and easier to keep them in the coop though.

Every few weeks I throw the aprons in the washer and put them back on. We’ve never had them get super dirty or pooped on really. The only time that becomes an issue is when they take them off themselves. I would recommend having a backup or two (depending on how many you are using). It’s just nice to be able to change them out as needed without worrying that all of the process will be destroyed overnight.

I hope you find this pattern helpful to make your own chicken aprons. Leave your cute aprons in the comments!