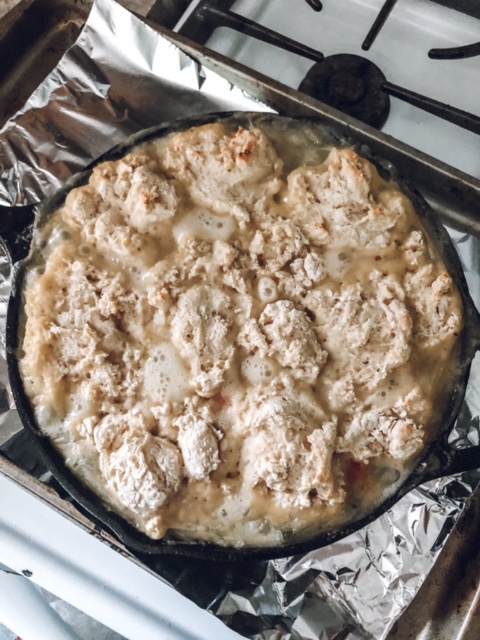 My dad and I used to love those little Marie Callender’s pot pies. We were the only ones in our house that liked them so we’d always pick some out together at the store. As I got older my mom cooked a lot less. She had another baby at the time and we were pretty busy so she just fell out of the habit. One of my favorite memories was enjoying a little pot pie with my dad. It was just another one of those little things that bonded us in such a small, but significant, way. As I grew up I got away from those little pies because of the sodium and calories included. I hadn’t even thought about making a pot pie until I kept seeing them on instagram with all the other homesteaders. The best and worst part of pot pies, in my opinion, is making the crust. This cast iron Chicken Pot Pie Skillet is the best of both worlds. It’s a chicken pot pie that is super easy to make.

The topping on this “pot pie” is biscuits. There is no bottom layer to the pie. It’s a bummer because I do love the bottom of the pie the most for some reason. There are a couple easy to have these biscuits too. It could be as simple as buying a can of the biscuits at the store. This would work just as well for the topping! I choose not to because we don’t really buy too many premade items but if that is your style- go for it! I would change the  baking directions to match exactly what is on the package. The other method that you could do is any other homemade biscuit recipe. Again, change the baking instructions to match whichever recipe you are making. I used the greek yogurt biscuits because they are tangy and they are super quick and easy to make.

I prefer chicken breasts or chicken tenders for this recipe. It really doesn’t matter what type of chicken you use. Fresh or frozen works. The only thing I will say is that it should be boneless. The other method would be to cook an entire chicken and de-bone it. If you already cooked a chicken and have some leftovers this would be a great recipe to throw them into. It’d also be a good one to use a rotisserie chicken on. Again, this is another quick hack that you could use if you wanted to.

The good thing about recipes like this is that they are as easy or as difficult as you make them. With store bought biscuits and chicken it cuts the recipe time in half. I would even estimate that it would be under 30 minutes with these hacks. If you are pressed for time it is still easy enough to make a nutritious and home cooked meal for your family. I loved those little pies but I know that this one has much better ingredients for me. Plus, even without the hacks it only took me around 45 minutes to an hour. That included having to pull mine out of the oven because it was dripping into the stove the first time too!

3- Add chicken to skillet. Sprinkle with salt and pepper. Cook until brown. Approx 2 minutes each side.

7- In a separate bowl, add biscuit ingredients. Mix until combined.

8- Drop biscuit mix by the spoonful on top of pot pie.

9- Bake for 15-20 minutes until biscuits are golden brown.

A word from the wise (only because of experience) put your cast iron pan on a sheet pan. Mine bubbled over and sent our smoke detectors off. Initially, I had this thought but dismissed it and regretted it. I caught it pretty quickly before it made too much of a mess but still not very fun to clean up. Cleaning an extra pan is significantly easier than cleaning the oven! I even put a piece of tin foil under my cast iron too which helps to not dirty another pan. One of my personal goals is to move away from using tin foil but, again, I want to provide these easy hacks so you have the choice to do whatever is best for your family.

Chicken pot pie skillet is the perfect addition to a crisp fall day! I’ve made it in the middle of summer and it just doesn’t hit the same way. In the summer I tend to crave fresh or grilled foods. It’s honestly not that pleasant to eat piping hot food in the heat, even if the air conditioning is on. We also like to eat outside at our patio table too, and it’s impossible to have a meal like this out there in July heat.  This is definitely one of those cozy comfort foods that you want to have on the table in the middle of a snowstorm.

If you want a thicker filling you can add some cornstarch or arrowroot powder to thicken the broth up into more of a gravy.
Keyword Skillet