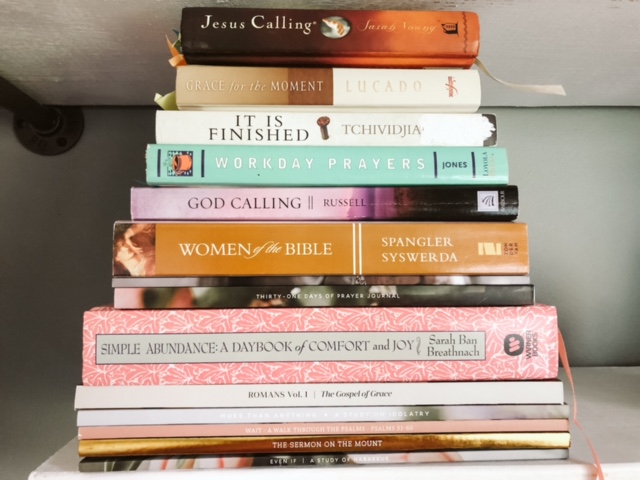 There have been many phases to my religion. From a religious upbringing to falling off the wagon completely followed by trying to find religion again before marriage. Then trying to bring faith into our marriage. The thing about it is, I don’t think it is all too uncommon. I think that there are a lot of us that ebb and flow with our faith (or religion or whatever you want to call it). For the purposes for all of this religion is your faith, your beliefs, your convictions. To me, it’s all one in the same. Religion as a word tends to get a bad reputation so please don’t take it poorly. What I’d like to introduce are some Christian Devotionals that have helped me through these phases.

I grew up going to the catholic church. During this time frame in my life I did not use devotionals. I went to CCD (Confraternity of Christian Doctrine) classes during the week  and church on Sundays. Honestly, I really had zero interest in religion beyond that. It felt like we were doing a weekly devotional anyways only it was hands on.

Falling Out of Religion

When I turned 18, I moved out. I moved to Indianapolis for college, first. Then I moved to a couple apartments during school and landed myself living with my cousin. I was making choices in life that were not great. I was not, by any means, living a Godly life. This was another time in my life that I just didn’t feel like devotionals in my life were important. Unfortunately, not much beyond alcohol was important. Soon though, things would change for me.

I started working full time during college. Thankfully, God pulled me out of the situation that I was in. It was painful and felt like my heart split in half. I wanted so much to keep living a carefree life with questionable morals. On the other hand, I was desperately seeking a better version of myself. After college I moved back in with my parents. Shortly after that I had saved up enough money to buy a house of my very own. This is when the true changes started.

Initially, the better version of myself was one that was losing weight. I worked incredibly hard on my health and was at the lowest weights I had seen since middle school. I started to feel better in addition to looking better. This finally helped me turn back to my faith.

Initially I started praying. I would have a long run on Sundays (we’re talking like 5-10 miles). There was a point in each run that I would set aside specifically for praying. By some miracle, I actually started to look forward to it! I prayed so fervently during those times and I saw so many real life things happen. It’s still emotional to look back at that time. This also lead me to my first devotional- “It is Finished” by Tullian Tchividjian.

My favorite part of this Christian devotional was that it forced me to open my Bible too. Each devotional also included a Bible verse that you had to read first. It was a t this point that I finally started highlighting and underlining in my Bible. I decided I wanted it to be so worn out someday that people would finally get the message that I did during this time-

Pray so big, and so often that when God meets you at heaven’s gate he says with a smile, “kid, you’ve kept me very busy.”

That’s how I lived. That’s how I found my husband. I hung a tie on my dresser and each night before I went to sleep I prayed for him. The tie reminded me and I’ll never forget the day he wore that tie. I knew God had heard me and He had answered in a big way.

Marriage was a harder test for both of us and still is. I grew up in a Catholic church and he grew up non-denominational. We essentially believe most of the same things. There is right and wrong. God is our savior. Jesus was sent to earth as God’s son to save us from our sins. One day, Jesus will return. In the meantime, we need to be doing his work on earth to prepare us for our salvation.

The harder part was finding a church we both liked. I no longer felt it necessary to go to the catholic church but finding a non-denominational church that was something we both liked was difficult. We found a small chapel near our old house that we loved but it was only open in the summer. Truth be told, we’re still looking for a church. That quest had me feeling the need for something more. That’s when I heard about the Daily Grace Co. on Instagram

Oddly enough, I heard about these Christian devotionals after our second miscarriage. I was struggling tremendously with my faith. During that second pregnancy I prayed about the baby every single day. I thanked God for that baby every single day, all the while knowing there was a chance we wouldn’t get to keep it. No matter how prepared I was and how much I prayed I still felt so betrayed when our second baby went to be with the Lord. Truth being told, I still get that feeling of betrayal some days. I’m human! I know God didn’t do it to hurt me, that’s not the God I believe in. It did cause a rift between us though, me and God.

It took me a long time to realize the relationship I had with God had to change again. I could no longer settle for the happy go lucky stuff that most devotionals offered. I needed depth and something that would help me ask more difficult questions. That is one of the few reasons I love the Daily Grace Co.

The Daily Grace Co offers such a wide variety. They have them specific for men and women. Yes, I bought Colin one too! He hasn’t done it yet but I have a feeling he will want to eventually so I have it just in case. They also have them for books of the Bible. If there is one that you aren’t familiar with you can dive into the book and understand it more. I had no idea what the book of Habakkuk was about and don’t recall it being discussed in church so this one appealed to me. They also have a lot of guides, aids, and tools available too.

The other thing I love about the Daily Grace Co is that they are modern. As you can see, I have a lot of devotionals. Some that I haven’t gotten to yet and some that I’ve used. One of the things I love is that they take Biblical issues but apply them modern day scenarios.

These Christian devotionals also require you to dig deep. They require you to get in the Bible and read the verses multiple times. They also have questions about those readings and interpretations. This forces you to really think critically about all of it. It’s caused me to think in different ways than I ever have before.

One of the aids that they have are prayer cards. As I mentioned, my faith was super strained for a while. I didn’t want to pray. I couldn’t pray. So I purchased some prayer cards to force myself to pray and help open that back up. Thanks to these cards I’m finally getting better again. I’ve now hung a rainbow up (just like my tie) to remind me to pray for our future babies.

I’ll review more of the Christian devotionals that I have as I get to them. What is your favorite? Is there a company that you prefer? I’d love to add more to my collection!