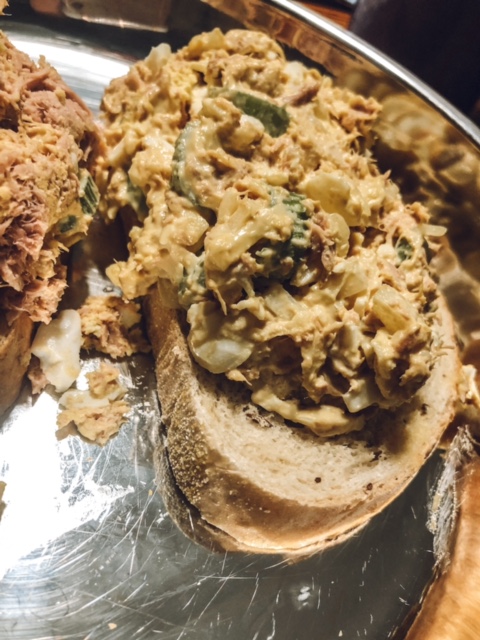 Growing up Catholic means I’m very familiar with the season of Lent. We spent those six weeks giving things up and removing meat from our diets on Fridays. Thankfully, our parents just let us eat a lot of pasta and didn’t force us to eat fish. Growing up, I was not a seafood person. Which is pretty ironic considering I could eat tuna every single day for lunch now. Funny how those things work out. As we approach lent this year there is going to be a fish shortage. It’s going to be even more important to have some recipes to dip into so you can avoid meat on Friday. This Edible Lenten Tuna recipe will be a great one to add to your collection!

I’m not going to get into a ton of detail but just in case you are curious I’ll explain a little bit. Lent is the 40 days before Easter. Starting on Ash Wednesday (google it if you want to know) and lasting up until Easter, this is a time of prayer, fasting, and almsgiving. Basically, it’s time to prepare ourselves for the resurrection on Easter. The tradition of not eating meat on Fridays is a form of fasting. It’s a form of denying ourselves so that we can push our hearts towards Jesus.

At least, that’s my understanding of it. If my gram was still around she would probably give a whole lot better explanation than what I can. The simple way to understand it is as a time of reflection before we celebrate the Resurrection of Jesus on Easter.

I could get into a whole debate about whether or not fish counts as meat, too, but I’m not even going to approach it. At the end of the day you get to choose how you do Lent. In our house fish does not count as meat (and it didn’t when we were kids either). However, if fish bothers you then you are more than welcome to cut that out too. I’m just sharing what I experienced and know about it.

This recipe is another one from a cookbook called Our Best Home Cooking and was put together by the St. Monica’s Guild and St. Stanislaus parish from Dorr, MI. This is also where I got the recipe for my white chicken chili that I shared previously.

It’s a great recipe book and my grandma has a ton of pages marked in it, proving she used it well. That’s the best kind of book! The recipe was submitted by Annette Gysin. Thank you Annette (and family) for giving this easy recipe to us! May you have a blessed lenten season.

This makes a great Tuna Melt! You can put it on English muffins, open-faced, and broil until the cheese melts or just put it on a lettuce bed.

This edible lenten tuna is something that we will definitely enjoy outside of Lent as well as during it. I realize it doesn’t look that pretty but it tastes incredible. Part of Lent is usually adding or removing something from your life (i.e. giving up candy, adding a bible study, giving up pop, adding a prayer group, etc.) If you are participating in Lent we would love to hear what your plans are for it! What are your goals this year?

This makes a great Tuna Melt! You can put it on English muffins, open-faced, and broil until the cheese melts or just put it on a lettuce bed.
Keyword seafood, Tuna