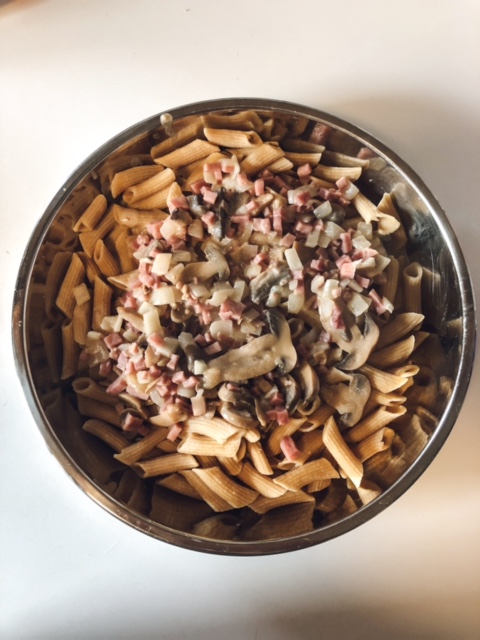 The thing that I love the most about old recipe books is that people were so much more resourceful. Women in these decades were really good at looking at their pantries and getting by with what they had. They didn’t simply just run to the store constantly and they couldn’t just order up dinner and have it delivered if they “didn’t have anything.” This required them to put together other recipes and learn how to cook different foods. We’ve largely gotten away from this as the years have gone by. I know so many people who struggle because they find themselves in a rut while cooking. Not only does this make food boring but it also means we aren’t getting nutrients from various foods and our guts are also suffering because we aren’t challenging the gut flora. I’m 100% just as guilty and I’m combating that by forcing myself out of the box. This week we tried a recipe for ham & noodles that my husband said, and I quote, “this recipe can stay!”

This book is irritating to me but also one of my favorites. How can it be both? Well it’s so old that they either weren’t binding books or it was much cheaper to not bind them. It’s held together with what I can only refer to as small chains. Remember back in the 90’s when kids would carry around those little rabbit feet on chains? It’s a chain like that only bigger. I love it because it’s so old. I don’t love it because I’m having pages rip off of it because they are in no way protected in the book. I’m considering a different way of keeping them together (like a binder) to make sure I don’t lose the whole thing at some point. I never thought I’d be thankful for book bindings!

Anyways, the original recipe was published in the Shettler School Recipe Book. This thing was made all the way back in 1974 as a fundraiser for the school. Oh how I wish schools still did this instead of selling the processed junk food, candy, and/or trinkets that people don’t really need anyway. Alas, too many families no longer cook dinner or just search the web for what they need and cookbooks are becoming a thing of the past. Enough of my nostalgia though.

The recipe was submitted by Joanne Wood. As always if you know Joanne please let her know that her recipes are living on with us. The recipe that she chose to submit has now become one of my husband’s favorites and we are thankful she made the decision to share it with us. If you are family to Joanne and haven’t seen this recipe I encourage you to make it and share it with the rest of your family!

In saucepan, brown  ham and mushrooms in butter. Stir in the rest of the ingredients. Heat; stir now and then. Garnish with parsley. Makes 4 servings.

One of the reasons I like this so much is because it’s an easy recipe to add to. If you’ve been here for any sort of time you know that I like to add vegetables wherever I possibly can. This one makes it super simple. I prefer to add onions in with the ham & mushrooms to get them sauteed. You could also add some spinach, peppers, peas, etc and it is delicious.

Also, another if you’ve been here you know moment- I don’t keep cans of cream of anything soup in my house. The ingredients in them are generally not very good at all and so I chose to move to a powdered version of cream of mushroom soup from Azure. I’m still finding the best ways to make it but it’s worked well for all of the applications. It’s definitely not going to be the same as the canned version but I’m okay with making a compromise on that because I know that it’s better for us.

I’m not sure about you but I cannot figure out how many noodles to make. I always make too much so I’m positive that I made more than 2 cups of cooked noodles and it was still delicious.

It’s also not the middle of summer so I do not have parsley on hand. I suppose I could have used dried parsley but I opted to just leave that off and it was fine without it. We aren’t that fancy anyways.

This was honestly a super simple weeknight dinner. It was so quick to whip up and I love that it used some different ingredients with pasta. We like to fall into the trap that if we are eating pasta it needs to be spaghetti with beef. Admittedly, that’s what we generally eat if we are eating pasta because the Italian in me craves that red sauce! However, this was an awesome change of pace and a really cool way to use ham, too. Little by little I am learning new ways to cook different foods and figuring out combinations to use what we’ve got on hand in ways that are practical and delicious. 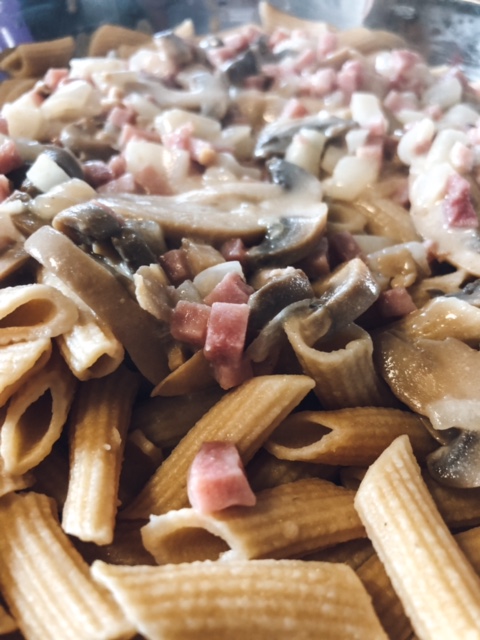