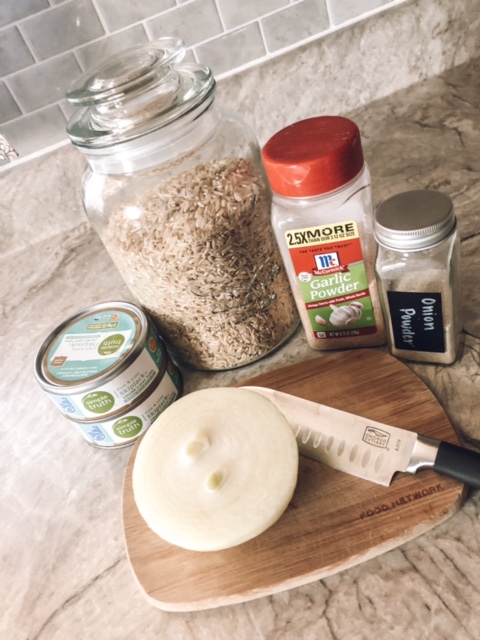 Growing up we never ate tuna. I cannot recall one occasion of eating as a kid and to be quite honest I probably wouldn’t have liked it back then. In fact, I was nearly 25 when I first found out that I actually did like it. I was on a fitness journey and trying to lose weight so I was looking for anything that had high levels of protein. Overall, I did end up losing around 80lbs total and I ate so much tuna it bordered on an unhealthy level. My friends and I actually googled how much tuna is too much tuna at one point. With this much of a tuna obsession it’s only fitting I would come up with an instant pot tuna and rice casserole recipe.

My obsession was real, you guys. I would eat it daily for lunch for weeks on end. There are so many flavors that they have now that it still didn’t feel repetitive to me. Thankfully, no one at my work complained about the tuna smell either because I was definitely that annoying coworker that always brought in their smelly food.  I wouldn’t recommend eating that much of it simply because there is a risk of too much mercury but if you are looking for high protein with minimal calories tuna is a great option. It was so easy to grab one one of the little packets as lunch or even as a post-workout snack.

I also like tuna because of the price point. A couple cans of tuna is only a couple dollars and can be a super easy meal. I always watched for the sales at Meijer when the tuna would be on their 10 for $10 sale and then I would get the 11th one free. Yes, I did eat that much tuna! I actually had my husband buy it by the box at one point because I was going through so much of it. I’m a little more picky about the brands that I am buying these days though. Even still, the price point is still better than beef or chicken.

Trust me, I do absolutely love my meat and this is not to put down any farmers by any means. We eat meat constantly and support our local farmers 100%. I also recognize that it’s important to vary our diets away from meat sometimes. Plus, the added bonus of saving money so we try to include various forms of seafood. We’ll eat tuna, ahi tuna, salmon, cod, and shrimp as other options as well. I also grew up Catholic so I’ve been used to changing our diet around for Lent and having one day a week that is “meatless” actually just seems normal to me.

Can’t you smell that smell?

The only thing you need to get over is the fishy taste and smell. My extended family swears that they can’t eat tuna because of the fishy taste that they get when they eat it. They do enjoy fish but they would prefer it to have more of a meaty taste, if that makes sense. When you reside in a state where you can catch a lot of bluegill and fry them up it is hard to compare that to just plain old tuna. There is a strong smell so if you’ve never had it before you should prepare yourself.

At our house, however, tuna is regularly on the schedule. I’ve stopped eating it for lunch constantly so that we can incorporate it into more of the dinners that we have. Then if I do eat it for lunch I try to at least rotate it so that I’m not having it for both meals.We love tuna melts, tuna patties, tuna casseroles, and just plain tuna sandwiches.

Ya’ll already know how obsessed I am with my Ninja Foodie so of course we are going to use it to cook some tuna. If you haven’t read any of my previous posts the Ninja Foodie acts as our instant pot. You can also just use the instant pot but the Foodie has more functions and that is why we chose it.

I didn’t want to do the traditional noodles and canned condensed soup though. For one, I no longer buy cream of anything soup. There are so many preservatives and things that we don’t need to eat in that soup! I couldn’t believe it but now it’s one of those things I no longer keep on hand. Most people love tuna noodle casserole but pasta is something we try to use more sparingly. I love pasta but I know that the carbs aren’t nearly as filling as a good source of protein. For this recipe I opted for rice as a slightly better carb.

This recipe is really simple with just a couple minutes of prep and, thanks to the Ninja, only 15 minutes of total cook time.

Rinse the rice and then put it into the instant pot. Add the remaining ingredients except cheese and stir. Pressure cook on high pressure for 5 minutes. Let it naturally release for 10 minutes. When it is done add the cheese and stir it in before serving.

That is it! I didn’t even drain the tuna before I threw it in this casserole. I literally just dumped all of it in and went on our way. I’ve found myself using the 5lb bag of frozen veggies from Azure Standard so much since we bought them. I was a little hesitant because it’s such a big bag and there are only two of us. It has come in so handy to just have veggies to throw into our meals though. In the summer it is so easy for us to get our veggies in because they are fresh out of the garden but we didn’t preserve quite enough of them this year to get us by. The ones from Azure are delicious and a great value.

You can read all about our first Azure experience here and try some of their product in your own version of this instant pot tuna and rice casserole.