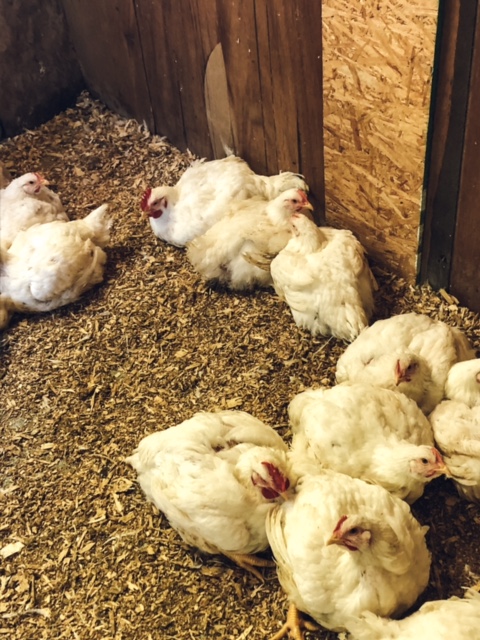 I ran into an old man in the feed mill who said “most people who do meat chickens once don’t do them again.” Honestly, I could see where he was coming from. Our first experience with meat chickens was not without excitement. There were parts of it that were really great and other parts that were just downright awful. Before I even get into anything I want to note that just because you raise laying hens does not mean you should raise meat birds. They are very different from each other and require different care and living spaces. Here’s our top advice about raising meat chickens.

Our first batch was a Cornish Cross. We honestly don’t love this variety of birds. This breed of bird is specifically made to gain weight quickly. That is also what makes them such pigs, though. They are super stinky and they lay around all day. Meat birds aren’t active like hens and that was still a big adjustment for us, too. The Cornish Cross chickens take about 6-7 weeks to grow to butchering size. The other variety that most raise is freedom rangers. The rangers are less pig-like but they take a little longer to finish up. This variety will take around 8-9 weeks to finish.

It also matters if you just get straight run vs. sexed birds. I wrongly assumed you could only get straight run for meat birds. However, we learned this is not the case. Roosters will gain more weight and they will get bigger more quickly. The hens, on the other hand, will take longer to hit the ideal weight. If you find that you have two different sizes of birds you may need to split up butchering day into two days. Do the large ones first and then do the smaller ones a week or two alter. We were lucky enough to do them all in one batch but there were a couple that were borderline too big or too small.

If you are raising the Cornish Cross variety you will most likely experience some form of death. Everyone warns you about this. I was was warned about this. It was still hard for me though. Any death makes me feel like a failure. We lost one chick within the first couple of weeks. This was likely just because it had something wrong with it since it hatched. The other we lost at about 3-4 weeks. The bird was just laying there when I got to the pen, legs straight out behind it. This indicates that it had a heart attack. When the birds grow too quickly they can have heart attacks and die very easily.

When I looked into raising meat birds the best advice was about feeding them. Give them food for 12 hours and then take away the food for 12 hours. We gave them food at 8AM and took it away at 8PM. They eat a lot more during the day but it is well worth it because we only lost a couple. It’s important to note if you are doing this you need to make sure they have full access to feed for that full 12 hours. You will know if they aren’t getting enough because they will practically attack you when you give them food.

The worst topic. In the last week before butchering we had a couple issues with cannibalism. The two that were getting picked on had some leg issues already. I knew that they were having trouble getting around and I was monitoring them closely. I started to notice that the comb on one was changing color. This is also an indication that they will most likely have a heart attack soon.

Around one day after the comb started changing the other chickens had almost pecked it to death. If you know chickens then you know if they see blood it just spurs them on. Thankfully, I checked on them often so I was able to get to him before he died. I put him in an “infirmary” in a crate outside of the big pen. He perked up about a day later and was eating and drinking. I kept him in the crate until butchering day. He was in the infirmary until butcher day (about 3 days) and lived out the last of his life in wonderful conditions.

Then we had another victim. It was a shock for me and I had no clue it was coming. It was also more traumatic. I knew she was having some issues getting around but that was it. She showed no other signs of issues. So when I came out and she was bloody I was pretty distraught. She was worse off than the first one and I wondered if keeping her alive was doing her more harm than good. We put her in a separate crate with food and water too. She didn’t perk up as much as the other one but she continued to eat and drink. It was Thursday when I found her and we butchered on Saturday.

Having to save chickens just to butcher them just felt really wrong. I was determined to not get attached to these birds, knowing we needed to kill them. Nursing them to health makes it difficult to not get attached. We made sure those were the first two to go when we butchered to make it easier on me.

The tools for butchering are super important and not easy to just grab anywhere. I’m really referring to the lung scraper. I was sure we could grab whatever we needed on Amazon but I was wrong. I don’t have Amazon Prime but they were still able to get us a good knife set in time. This is pretty key because it will make the job 10x harder if your knives aren’t good. The easiest way to get bags is to order a kit from Amazon, which is what we got. However, the bags were almost too small. We had to really work to get some in there. I’d still recommend the kits but pay attention to bag size. Unfortunately, the lung scraper we want is on back order. Thankfully a friend let us borrow one to get us by for this round.

Initially we were going to do the entire job without a plucker. Thankfully, we also changed our mind about that and borrowed one of those too. That was well worth it and saved us hours and hours of time. We’ve already decided if we make this a regular thing we will 100% invest in one because it’s so worth it. Honestly, it’s even a good prep item because if we have to hunt it’s so much easier to de-feather birds this way so we will probably end up with one regardless.

I’m still pretty shocked about how quickly the butchering process goes! There were 4 of us and 30 birds. From set up to tear down it took us about 5-6 hours. We also took several breaks in between to clean up some things we no longer needed and to just sit for a few minutes. We initially planned on having 6 people there and we were pretty happy we only had four. The flow was almost perfect. The only station that clogged a little was the kill cones because the birds needed to drain. It still was smoothly enough that it didn’t hold us up too much though.

We got our meat chickens a little later in the spring because we were hoping to put them outside for the second half of their life. How’s that saying go? We make plans and God laughs? That’s exactly what happened to us. It was so cold at night through most of the spring that we struggled with what to do with these birds. We started them in our garage which I would 0/10 recommend. They are so much stinkier than hens and it’s really unpleasant to wake up to every day.

We tried to wait until it was warm enough to move them straight from the garage to outside but that just wasn’t going to happen. They were missing a ton of feathers and it was still in the 50s at night. Finally we set up a pen in the barn and made it work. About 2-3 weeks before we were due to butcher it was warm enough to move them but we opted to just leave them for this round.

On the flip side, once it warmed up the meat chickens got too warm. It was in the 90s and high humidity some days. Then we started to worry they would get too hot. We added a fan to their pen and monitored the temperature with a thermometer we added. I checked them 4-5 times per day to make sure they had enough water and weren’t panting too hard. They went through so much water it was hard for me to leave the house even though we had multiple waterers out there. Looking back we would have just started them earlier and dealt with the cold to make sure we didn’t have to deal with the heat. One or the other is more than enough.

Would we do it again? The final answer is yes. We will most likely do another round either this fall or in the spring. My parents have volunteered to raise the next batch so at least our only work will be for butchering this time. Our final total came to $8.90 per bird. Right now birds are around $12 at the grocery store for smaller chickens. Yes, it took a lot of my labor to make that happen but at the end of the day it was worth it. We know how our chickens were raised and we know that they lived a good life. They were healthy when they were butchered and they were processed with love.

It was difficult and we know a lot about what we would change for the next round. Honestly, I think we all want to challenge ourselves to do it even better next time. Not that we are perfectionists but we are perfectionists and want to be good at it. Even learning to butcher the birds was super fascinating and a great skill to have.

Have you raised meat chickens before? Would you do it again?