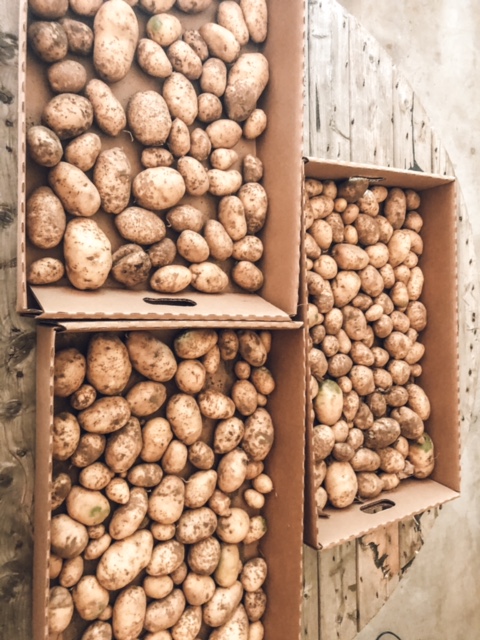 I was 30 years old when I planted my first potatoes. We’ve always eaten potatoes but we’ve never grown them. For some reason we just never really had a desire to put them in our garden. The one thing about them is that it takes a lot of space to grow them and we didn’t want to have a garden that covered our entire lawn. Okay, my dad didn’t want a garden that covered the entire lawn. I’d have something growing on every single inch of our property if it was up to me. Well, now it is up to me! Our garden is pretty large and we decided to experiment to see what we could grow. I knew potatoes was something I wanted to try and I’d love to tell you what we learned our first time growing potatoes.

The first thing you need to realize is that you need to choose potatoes early if you are going to order them. January/February is best because by March it seems like all the good ones are already sold out. There are a ton of places to order them though and it’s best if you can order them from a local spot. Our local stores get them in during the springtime too and that is also a good option.

I was a little panicked and worried about the supply so I decided that I would order mine to be safe. I ordered them from the Maine Potato Lady. It’s kind of weird because you order them and it’s like your order disappears until a box of potatoes shows up on your doorstep. They don’t ship them until just before planting time in your region. Whomever is shipping them will ask what region you are in so that they can get them to you at the right time. Too early and they will sprout. Too late and you’ll lose valuable growing time.

There are also a lot of varieties that you can choose from. Obviously there are the standard varieties that you can get from the store but there are a lot more than that. Each one has their own features and benefits too. The main thing that we were looking for was storage ability. There are certain varieties that keep better than others through the winter.  We ordered Kennebec potatoes and decided they would be best for what we were looking for. They are described as high yield and good for storage. I’d love to give advise on this but it’s going to depend on what you want for your potatoes and what your tastebuds like too! Growing potatoes doesn’t have to be boring either, you can grow several different varieties if that makes you happy!

The first thing that you need to do to get the potatoes ready is to cut them up. You can put them in the ground whole but that isn’t the most bang for your buck. Each eye is another plant. You want to cut up all the eyes into chunks so that they can be planted individually. I wish I would have taken pictures of this process but I was not blogging back then! I will update with pictures next spring when we plant them again. The chunks of potato should be placed 2-3” deep and 12” apart. We placed ours a little too close together this year. They still grew well but I think it could have helped to space them out a little more.

This is one thing that we missed. We just didn’t take great care of our garden in the first place so we did not hill our potatoes. When the plants are 6-8” tall they need to be hilled. Mound the soil on each side about 4” high. You should continue this process until the plants are around 12” tall. The potatoes will grow without this but your yield will be much lower. The hills help the plants spread more roots and, thus, grow more potatoes!

Once the plants are about 12” tall you just need to let them grow. You need to watch for the blossoms on the plants. When they blossom they are about 2-3 weeks from being done. If you want to eat them fresh and not pull them up for storage that would be the soonest you could get some out of the ground. The blossoms basically tell you they are nearing the finish line and you will have some potatoes down there.

Your potatoes can stay in the ground until you are ready to harvest. Once they are grown they are not frost hardy though so be sure to get them out of the ground before your first frost. Your plants will start to brown and lean over when they are ready. As I mentioned, this should be around 2-3 weeks after they blossom. We dig ours up by hand but you can dig them up with a shovel if needed or preferred. I just love to get my hands in the dirt and it’s pretty fun to pull them all up.

It is important to cure your potatoes. After pulling them out of the ground you should brush off any excess dirt. Lay them out on trays so that they can still get some air flow. They need to be kept in the dark, with no light, for 2 weeks after being harvested. If they are in the light they will turn green. The green on potatoes isn’t the worst thing but in high volumes it can be toxic. It is advised to cut off any green parts before eating.

Once they have been cured for 2 weeks they can be put into storage. We are wrapping them in newspaper and putting them in cardboard boxes. They still need to be stored in cool temperatures in the dark. The light will cause them to sprout early. If they do sprout you can always save them for the next round of planting. Then you won’t even have to buy them for the next year.

We aren’t experts by any means! The biggest thing we learned while growing potatoes is that we are giving up the yield by not hilling them. It’s not something you can just throw in the ground and expect to get a great harvest from. The care that they need is not tremendous though and with a little extra attention the output will be noticeably different.