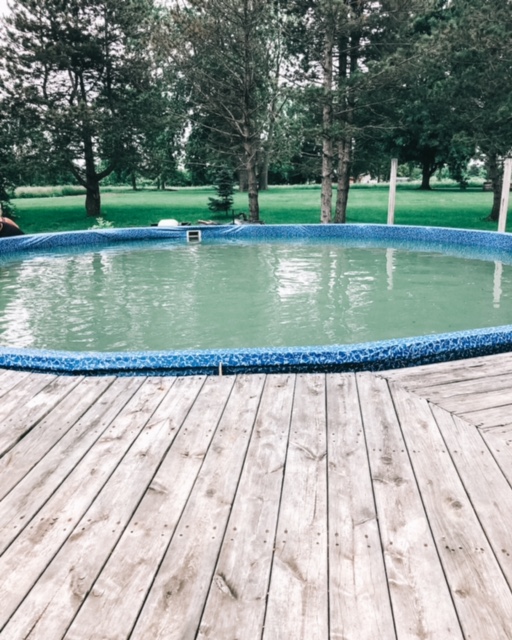 Winter felt both short and long this year. I was very intentional about creating down time and resting. As it turns out, I don’t think I did enough of that. As soon as the sun started staying out longer we did too. Our list of summer projects was a doozy this year. It’s the first spring in our house and on this property and there was a lot that we couldn’t do in the fall. That meant we needed to hit the ground running…and that we did. Here’s a list of our spring homestead projects!

Obviously, the garden is one of our top priorities in the spring. We want to get things growing as quickly as we possibly can but we also have to fight with the weather. This year, we had to fight with the weather a lot! It was a very wet spring and also very cold. In fact, we had lower temperatures into June this year too! That delayed a lot of people from planting. Thankfully, we were able to get everything in by memorial day, which is always our goal. Our garden has remained very wet and we are definitely questioning what is going to survive this. A brand new garden takes some time to adjust to and also a lot of care because the grass still wants to grow. This year’s garden will be a lot of learning and definitely a lot of weeding.

Our house came with an above ground pool which didn’t appear to be in bad shape. I was thrilled because I’ve always wanted a pool. I almost immediately regretted those hopes and dreams.

They didn’t close the pool in the fall and the weather was REALLY cold right after we moved which meant there was no way we were getting in the water. We tried to clean out all of the scum that was left behind and I ended up poking a hole in the liner. Upon further inspection, our pool needed some serious work.

As part of our spring homestead projects, we took it all down and started again. Then, as we were filling it with our well, the liner blew back in and water rushed back out washing out a bunch of the work we already did. So we started again. This is one project that is still currently in progress because we are waiting on the fire department to come fill it for us. Needless to say, it added a ton to our workload that we were not really anticipating and would not have guessed from the look of the pool.

When we moved in there were a lot of “surprises.”

One of those was that the basement was nearly infested with mice. It wasn’t possible to see all of that when we looked at the house because there was so much stuff in the basement you couldn’t see past it. Also, most of the damage (and really just the droppings) were in the drop tile ceiling. They didn’t have any windows in the basement so we knew this was a risk. In the fall, we decided to put windows in right away. We had to take down a couple of the ceiling tiles and realized how bad it was. They had completely ruined the insulation around the edge of the basement. We didn’t even know about the bees until we started taking down the insulation, they also did a lot of damage.

Over the winter we gutted the ceilings and walls down to studs and cement. The insulation, however, had to wait because it holds in a lot of the heat for the house. We’ve now purchased some of the insulation but haven’t gotten to installing it quite yet. It’ll be a good one for when it’s super hot this summer because the basement stays cool.

The worst time to try to install a furnace? When you need it. That means we needed to wait until the spring to switch out our furnace. We purchased it when we moved in and had it delivered over the winter. It’s been hanging out in the garage for awhile. My dad has promised to help us get it installed soon but that leads us to our next project.

Our current heat source runs on fuel oil. Have you seen the gas prices lately? That means the cost of fuel oil is going up, too. Well, the cost of all heating sources are going up. We are opting to switch to propane because it’s a little easier and hopefully more efficient. This should be a relatively easy process for us but we’ve been putting it off until we are a little further into our other projects. Plus, this is going to be one of the more expensive ones. However, it leads to the next project too because it has to be done for the next one to work…Starting to see how crazy this is?!

Another thing we did in the fall was get new appliances. It sounds so crazy that we bought everything but we wanted to at least get it all on hand. For one, the supply issues were crazy and we figured they were only going to get crazier. For two, the cost was already going up and we figured that would continue as well. We were correct on both fronts and even though some things have sat in our garage it has been worth it to have them and to have gotten the deal that we did. Once the propane is installed we can hook up my brand new double oven. I’m so beyond excited to have gas again! I’ve been able to can on our current electric stove but not without difficulty. For that reason, I’m hoping that we can get this one done before canning season kicks off.

The house has no air conditioning and that is a real downfall for us. Sure, we can use window units but once you’ve been spoiled with central air it’s hard to go back. We had to replace the furnace anyways so we decided to add central air to that. We ordered everything right when we moved in so we’ve had it sitting in our garage since January. Now, we’re just waiting for someone to get some time to get it installed for us. This one is on hold because we don’t have enough breakers to be able to support it. We either have to replace the stove then work on this or move to the next project.

This was one of the spring homestead projects we really wanted done in the spring but it’s being pushed to summer due to the availability of HVAC and electricians. It’s a huge bummer for us, but we’re getting by for now.

The electric breaker in our home is pretty dated. There was one thing that they did with wires that the inspector did not like. He said it was working but it was a “no-no” in the electric world. We opted to upgrade our power to be able to add more breakers and fix what they had done incorrectly. This also allows us to add a hookup for a generator. This was something we wanted to do anyway so I’m happy that we’re able to get them both done at the same time.

As it stands there is no running water out to the barns. This creates a real challenge when we want to put animals out there. Even now, we’ve put the meat chickens and geese out there but we have to schluff water back and forth to make sure they are taken care of. Thankfully, it’s only a couple times a day but there is no way that would be sustainable with larger animals. This isn’t a must for our project list but if we want more animals it has to be done first.

This was a project we didn’t anticipate and it’s caused a lot of tension and stress. The construction company that put in our new drainfield (as part of the sale) did a horrible job. They left a big portion of it graded incorrectly which leaves standing water on it every single time it rains. It was there all winter until it reached the 90s and it finally dried up a bit. Now, the construction company will not fix this issue without forcing us to pay for it. Pretty shady, huh? So we’ve been trying to figure that out and working to get a solution. This one is pretty big because the water will cause the drainfield to go bad if we don’t get it fixed.

The most simple of our spring projects- the mailbox! Our post was broken before we moved in and the door would no longer stay shut. I grabbed a mailbox on clearance from the hardware over the winter knowing we would need it. This is one of the few projects we’ve been able to complete and I’m proud to say it looks great. Plus, our mail doesn’t get wet anymore!

We decided to take the leap into the meat bird world! Our plan was to raise a bunch of birds and butcher them together as a family. This gives us all an opportunity to fill some of our freezer. We were a little nervous for our first batch but we decided to do 30 birds.

We’ve lost two so far and I have a bad feeling we are going to lose a few more. Remember that cooler weather I mentioned? Well that has changed our plans for our birds too. Normally once they got feathers we’d put them outside and it’s June so it should be plenty warm. The problem is that the temperatures have been hovering in the 50s at night, which is not warm enough to put them out without a heat lamp. So, we’re improvising with a temporary pen in the barn. They are already four weeks old now so only a couple of weeks left. We might still move them to their outdoor run but right now we’re just happy that this process is working and they seem to be thriving.

So far, we have three projects done. That’s hard for me to admit, especially considering how hard we’ve been working. I mean working, guys. It’s been “go” non-stop for us. We finally fall into bed around 9PM and try to get to sleep by 10. In winter we’re in bed by 7 and asleep by 8! How things change with the seasons…Anyways, there is a small taste of what is going on for our homestead this spring (pretty much summer). We’ve got a few more weeks of nose to the grindstone work and then most of our spring homestead projects should start to wrap up (even though it’s already summer).

What projects are on your list? Have you crossed many of them off yet? I’d love to hear what you are working on!