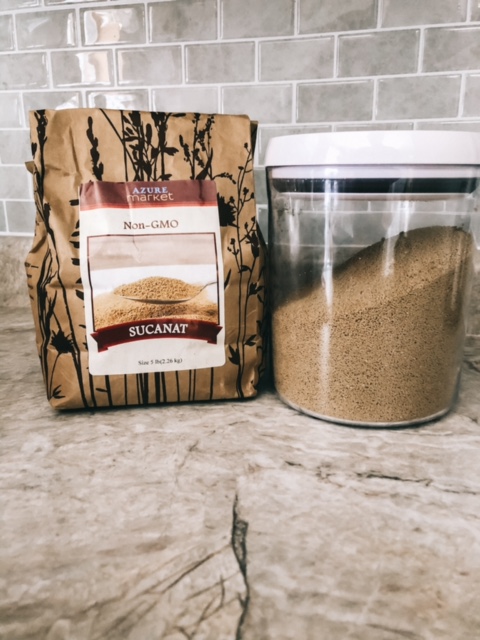 The alternative sweetener you never knew you needed.

Sugar in American diets is a major problem. Food manufacturers are sneaking it into every little thing these days. Processed foods are notorious for having unnecessary sugars added to them. However, even as you try to eat healthy and cook from scratch a lot of things still call for sugar. In my honest opinion, most recipes include too much sugar to begin with. I was listening to the Prairie Homestead podcast when I was first introduced to sucanat. Using sucanat as a sweetener in recipes has helped me to decrease the amount of sweetener in my homemade goods.

Sucanat stands for sugar cane natural. It’s a weird word for it but it makes sense. It is made by extracting the juice from the sugar cane. Once extracted, it is beaten by paddles into granules. It is less processed than normal table sugar. Table sugar requires much more mechanical processes to get to the finished form.

Sucanat is more flavorful than normal white table sugar. In all of my experience I’ve found I can add less of it to the recipes. It has a stronger taste and reminds me of more of a cross between white sugar and brown sugar. There are some people who say that it has the same molasses taste that brown sugar does but I haven’t noticed that. I interchange it with both white and brown sugar in recipes. Brown sugar is white sugar with molasses mixed in. There are plenty of DIY brown sugar recipes out there and the only 2 ingredients are granulated sugar and molasses. That means that sucanat is just like brown sugar without adding any molasses or anything else to it. The scant will have a similar taste to brown sugar since they both have the molasses flavor.

Even the chemical makeup of sucanat is a little bit different than normal table sugar. Granulated table sugar is made primarily of sucralose. Sucanat is still primarily sucralose but also contains some fructose and glucose as well. From what I have researched the chemical makeup of this is still so similar that it has the same effects as normal table sugar. I guess in this way it truly doesn’t quite seem to be that much better.

Is Using Sucanat in Recipes Really Better For You?

In the long run, we’ve seen that sucanat is actually really similar to granulated table sugar. So why is it better? I find myself using less of sucanat as a sweetener in recipes. The issue with sugar is that we are eating it in excess. The recipes are just as sweet but they take less of the sucanat to make it that way. I could probably make my recipes with less granulated sugar too, but I think we’ve all been there when the recipe was just too bland.

I often find the same thing with honey as well. When I try to use honey as an alternative sweetener I end up having to add quite a bit of it to make sure that the recipe is sweet enough. When I researched conversions they actually called for more sucanat than normal granulated sugar. I’m not entirely sure why that is either. As I mentioned, I’ve done some testing on this and I add less. However, I also prefer my recipes to be less sweet to begin with so I might not be the best judge.

It’s more flavorful! With that molasses taste that it has it just tastes better than normal sugar. I truly believe this is why I might be able to use less of it. Using sucanat as a sweetener might not be as sweet as sugar but it has a different flavor to it. Without giving you some baked goods or having you try it, it’s really hard to describe.

As I mentioned before, I also interchange this with both white and brown sugar. Having one thing on hand that can replace both of those has turned out to be super handy. I can buy one type of sweetener and only need to keep one jar in my pantry. Seems silly but clutter makes me anxious. I’m constantly trying to find ways to remove things from my household. When I try to get rid of things the kitchen is one of the hardest to clear out. I have so many things that I don’t use all the time but need to use occasionally so they are worth keeping. This is one easy way for me to reduce clutter in my kitchen without getting rid of something that I might need later on.

I buy my sucanat from Azure Standard. The quality is good and it is organic- like most of their products. Plus, I can buy it in bulk so I’m not making extra trips to the store.

Let me know if you try it and how it works in your recipes! The verdict is still out on whether or not more or less is needed when using sucanat as a sweetener to replace granulated sugar. Let’s try to settle that debate!